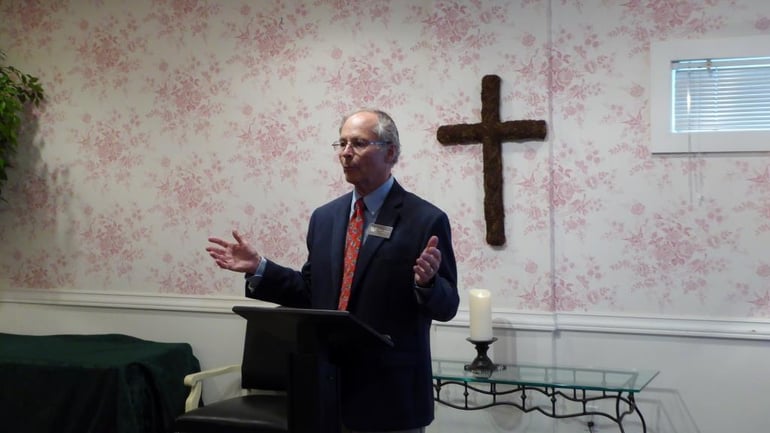 His name is Frank Feeney, yet folks who know him around Weatherly Inn call him “Blaise.” It was a name given during his tenure in a Benedictine monastery back in the mid-1960s. When asked why he kept it, Blaise replies, “When I call someone, I simply say, ‘This is Blaise,’ and they know instantly who I am. Just like Ichiro, no one asks my last name.” Blaise is the resident chaplain at Weatherly Inn, and his background, education and experience make him a champion for residents with dementia and end of life needs.

When Blaise first arrived at Weatherly Inn to be the general manager, there were two retired pastors conducting Sunday services and Bible studies. Not long after, the two pastors fully retired, and Blaise inherited those ministries as well. Even before then, when residents or family members were dealing with death, dying and grieving, it was natural for Blaise to be present with them as they traversed those paths.

Blaise began his career in ministry as a biblical studies teacher at Saint Martin’s University in Lacey. Later, he became the Director of Religious Education at Saint Michael Parish in Olympia, a chaplain at Providence St. Peter Hospital and a pastor in Camas. It was in the mid-1980s that Blaise found his calling in senior living, where he worked as a general manager in assisted living and memory care communities until he retired in 2008.

For Blaise, however, “retirement” is a bit of a subjective term. Not long after, he became the weekend manager at Weatherly Inn. These days he spends several hours a week at Weatherly Inn performing chaplaincy work, leading the Alzheimer’s Support Group, and teaching caregiver classes for dementia and mental health. Asked why he does not retire fully, Blaise responds, “Why should I give up what I enjoy most in life – helping people, preaching the Gospel, healing the sick, comforting the dying – to sit home or travel crowded highways?”

Initially, Blaise led an ecumenical service for the residents in memory care. Eventually, independent and assisted living residents started coming. It became apparent that another service was necessary. Soon, there were three services on Sunday. Residents say they enjoy the short (not more than 30 minutes), meaningful and scripture-based community celebrations. Singing is also a part of each service.

Blaise explains, “I try to build up, give hope, put things in perspective and emphasize the joy of the moment in the little things of life – a flower, a colorful leaf, a smile given or received and thanksgiving for relief of pain.”

Cider II died in 2015 after 11 years of joyful service to seniors, their families and staff. Photo credit: Weatherly Inn

Blaise has partnered with three distinct, intelligent and loving golden retrievers over the last 25 years. Each has brought joy and tactility to residents. Each dog was named Cider. The first was a trained therapy dog. The second was a natural therapy dog who was so talented that a resident PhD in animal psychology called him the best dog he had even known. Cider III (C-3), now two-years-old, is still a work in progress. “The residents recognize me, smile when we meet and if I am without Cider, the first thing they ask is, ‘Where is the dog?’” laughs Blaise. “Some recognize me by my dog. One even always greets Cider first!”

It is this kind of camaraderie that keeps Blaise at Weatherly Inn after all this time. “It is the best senior living community of its type,” he says. “What makes Weatherly Inn so special is threefold: first, the quality and longevity of its staff stands out. Second, the original developers still own Weatherly Inn, and their son is president and CEO. And third, monies go back into the building and into having extra employee positions – like mine as chaplain.”

For groups or churches wishing to have Blaise come and share about how to deal with dementia or about how to be more effective in ministering to the elderly, especially those living with memory loss, contact Weatherly Inn at 253-752-8550 and leave a message for Blaise to contact you. 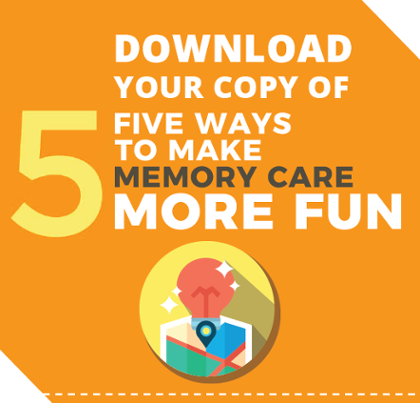